MAZDA Motor Corporation (マツダ株式会社) had a successful year in 2016 with the launch of the new models. However, with a 74% bounce rate the existing Mazda car app lacked a positive impact from the  users. The task for this project was to reimagine a new Mazda Car app with the users need in mind. 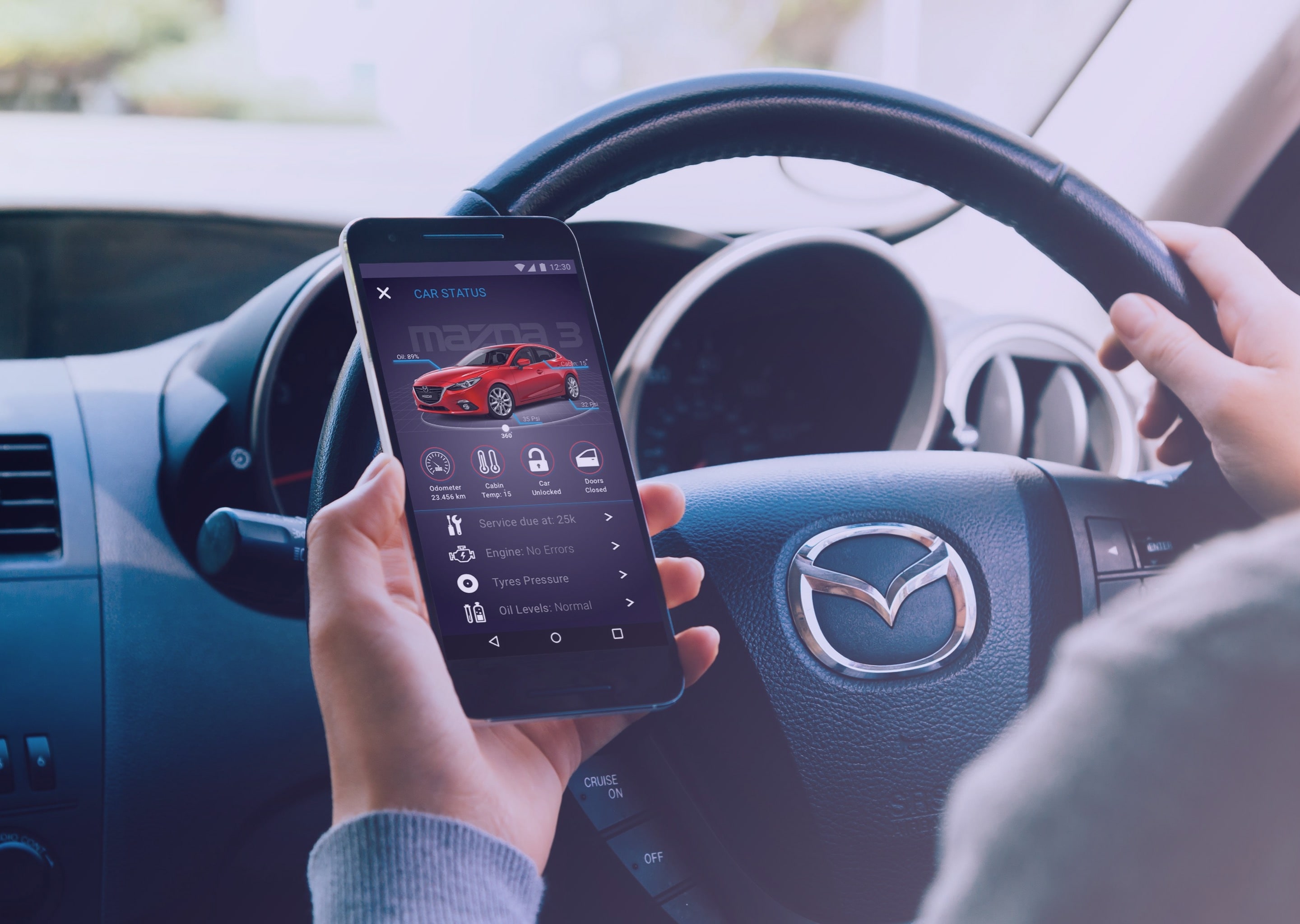 The Mazda Car Assistant wherever you need it.

The new app had to outperform the existing Mazda app in terms of user experience and usability. The idea behind the app is to offer a significant value to the user whenever he wants to connect with his new Mazda car. The user flow had to be well thought out so that the app is the first stop for everything Mazda. 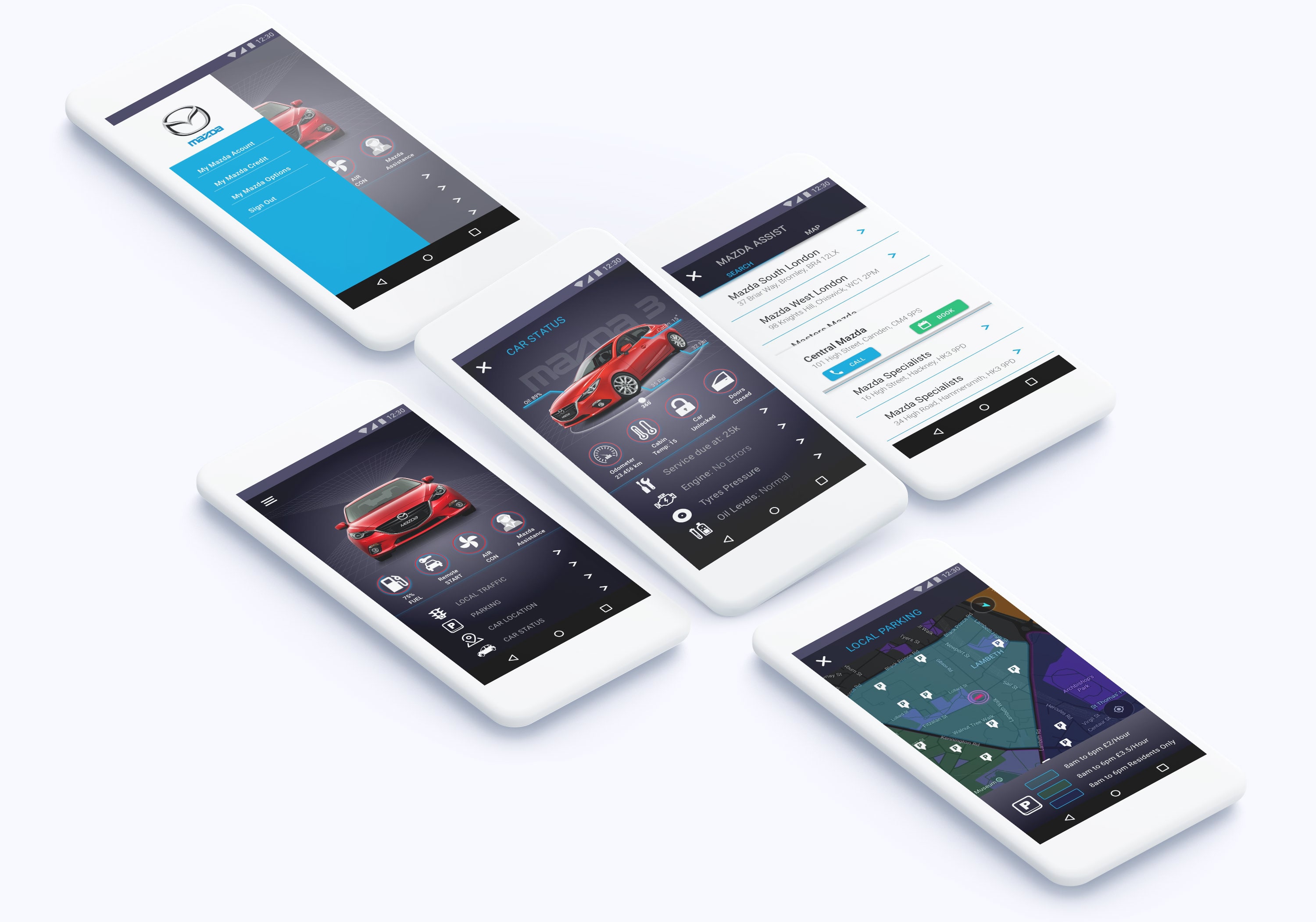 Before getting to the first sketches we needed to understand the brand, the problem needed to be solved and the users who will use the app. The methodology chosen for this project was based on qualitative research. I have made the effort to carry out interviews with Mazda car owners and drivers that showed interest in car apps.

/Who are we designing for?

The app is intended for the Mazda car owners who want to connect with their new car or the Mazda enthusiasts, users who want to find out more about the brand. The majority of Mazda buyers demographics fall into late generation X- early generation Y category, live in urban areas, professionals with a stable income.

/What are they going to use the app for?

The app will serve as a complementary car assistant for the new Mazda owners. Some of the app features the new owners will be able to enjoy such as:
Direct line access to Mazda Customer Support &  dealer recommendation
Instruction manual and related information regarding  Mazda vehicle
Remote functionality options: remote start/stop , remote lock/unlock
Location based recommendation : parking, car location, traffic alerts

/Why are they going to use it?

The app should represent the first stop for the new Mazda owner in finding trustful information related to his car, ask for recommendations based on his location. The new app will also serve as a convenient digital assistant to perform specific car related tasks.

/How are they going to use it?

The new Mazda owners are more likely to use an official Mazda app if it's going to offer useful location based recommendations and remote activated features.

For this project I have  applied some of the Lean UX principles in order to backup the design decisions I have made and to test the hypothesis I came up with.
This technique has let me to focus on features for a MVP that should be presented to the stakeholders involved in this project.
1.
Involved users early on through interviews and prototype testing
This is some text inside of a div block.
This is some text inside of a div block.
2.
Practiced collaborative Design by involving all the stakeholders and potential users
3.
Developed User-Centric Features based on the patterns highlighted from the interviews
4.
Removed waste by focusing on must have features other than just beautiful but not so useful UI-s
5.
Failed early & often. After filtering down the core features I have tested my wireframes and mockups using prototyping tools such as Invision & Marvel.

This research relied on qualitative data gathered through interviews and quantitative data in the form of online surveys. The respondents were chosen to be car drivers and at least with some awareness of the Mazda brand. The results showed that new car drivers are less concerned about dealer recommendation feature compared to drivers with used cars. Parking recommendation and vehicle location were popular features among the respondents but also it directly related to the driving habits and user location.

All the respondents were excited to find out more about the remote features such as lock/unlock, engine start. One of the key findings was that the app will be limited to new Mazda models as the car will have to be factory fitted with a sim-card and GPS module in order  to communicate to the app. This will limit the number of the app downloads and users feedback.

What car related apps do you normally use on car?

How do you search and contact your local car dealer?

How often do you
check your car fluids, tyre pressure etc?

Have you tried looking
for parking spot using an app?

How often do you read the car manual?

To what extent would you trust an app to control a car? 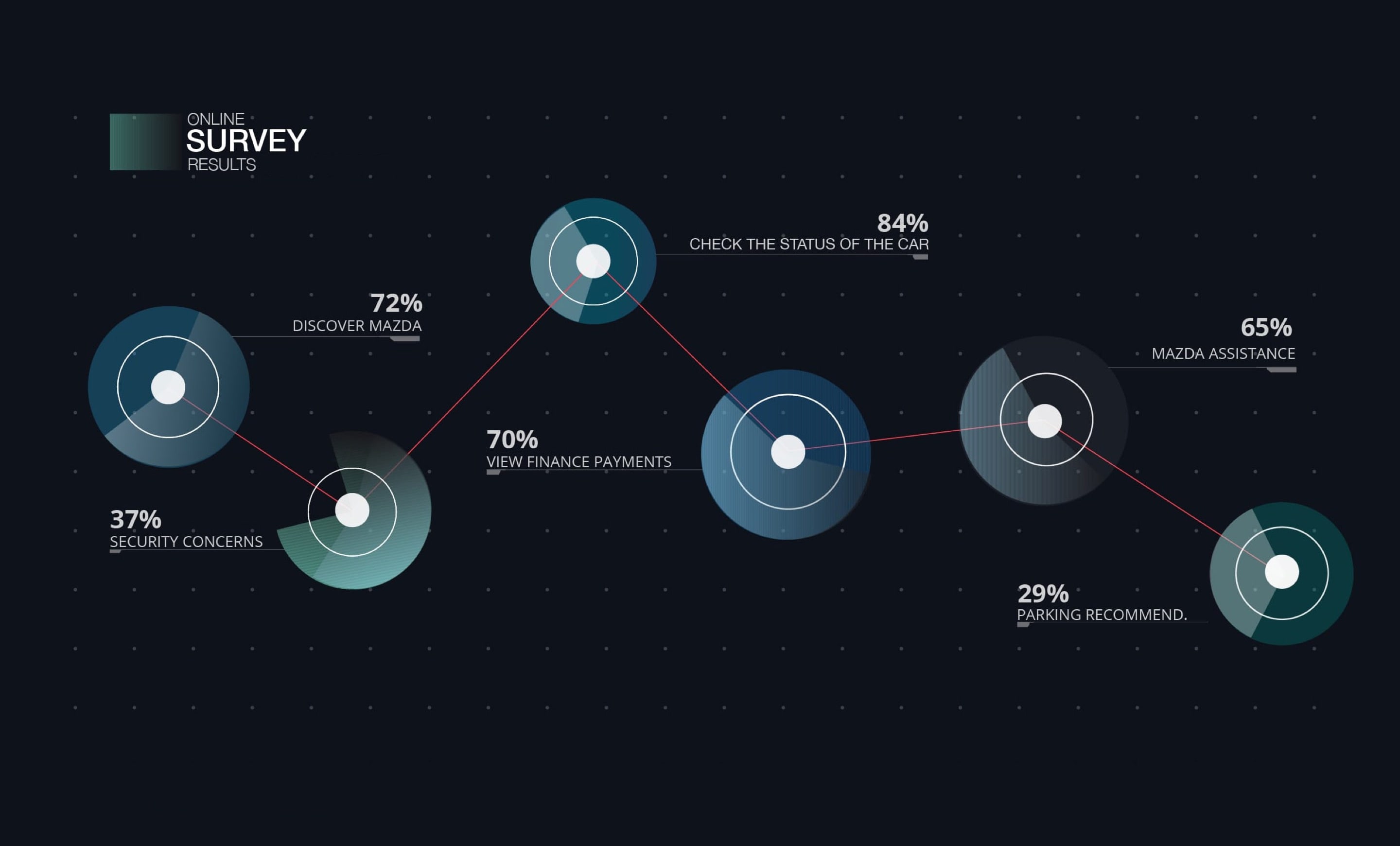 84% of the respondents were interested in checking the car status 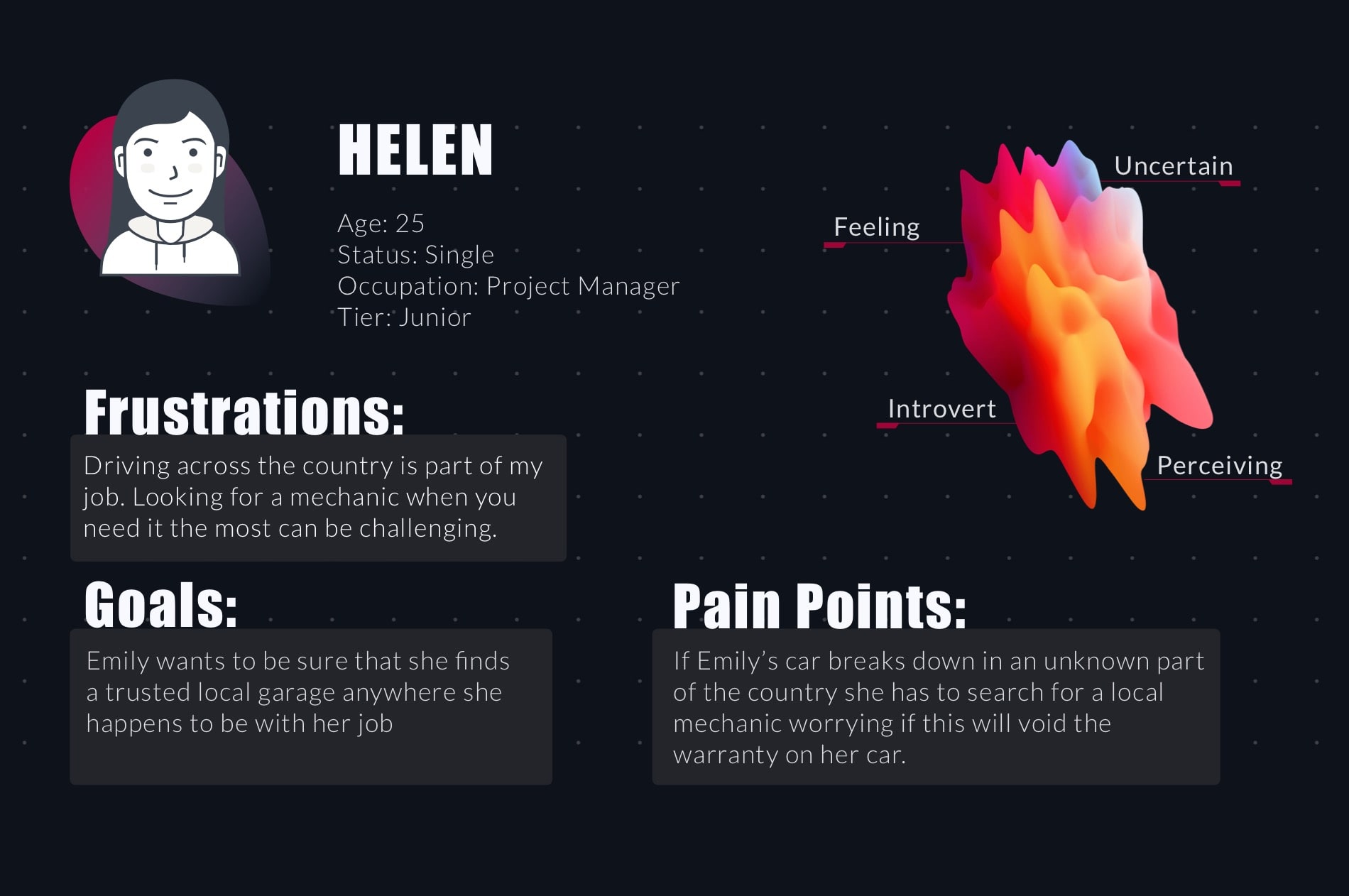 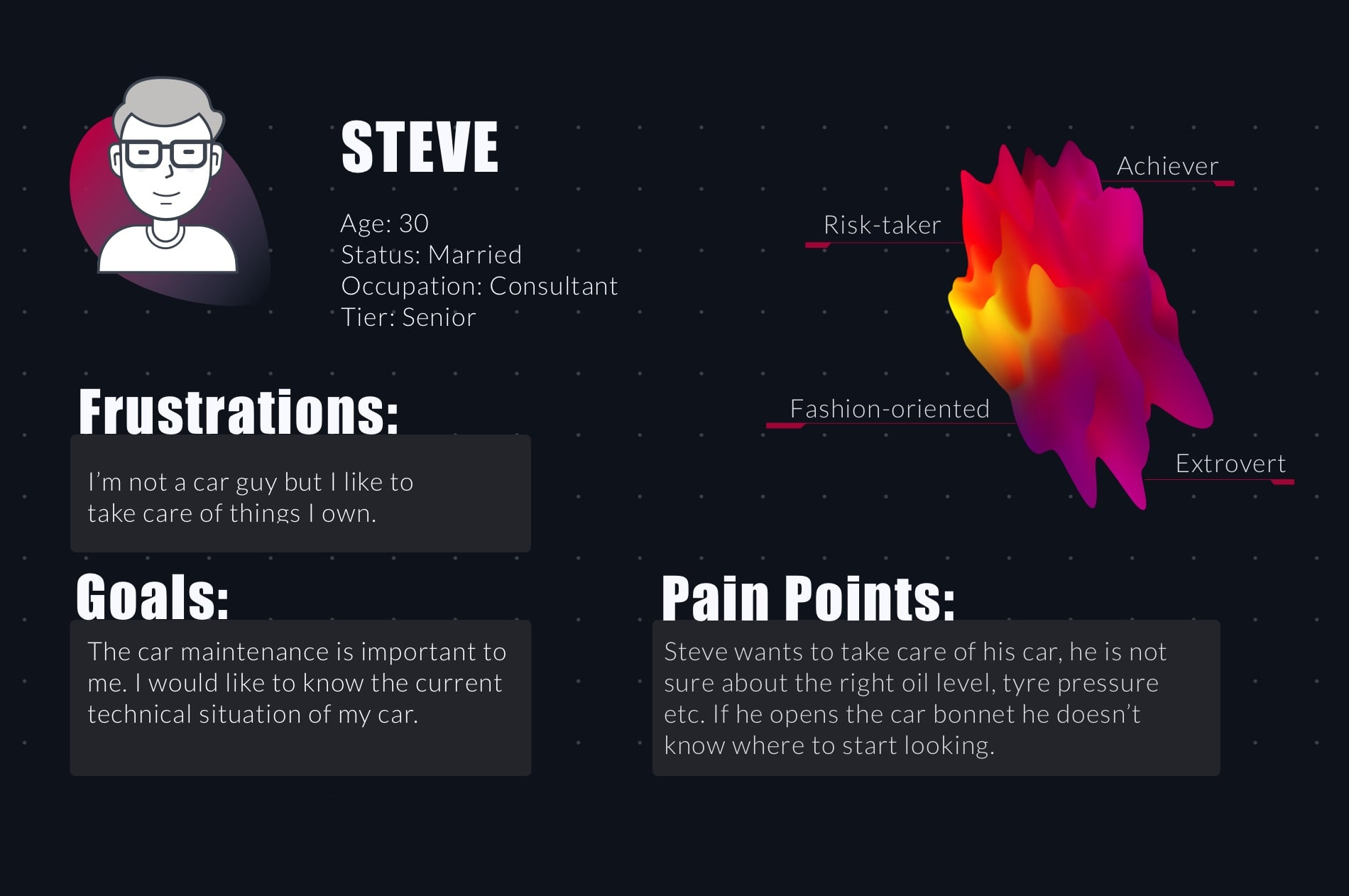 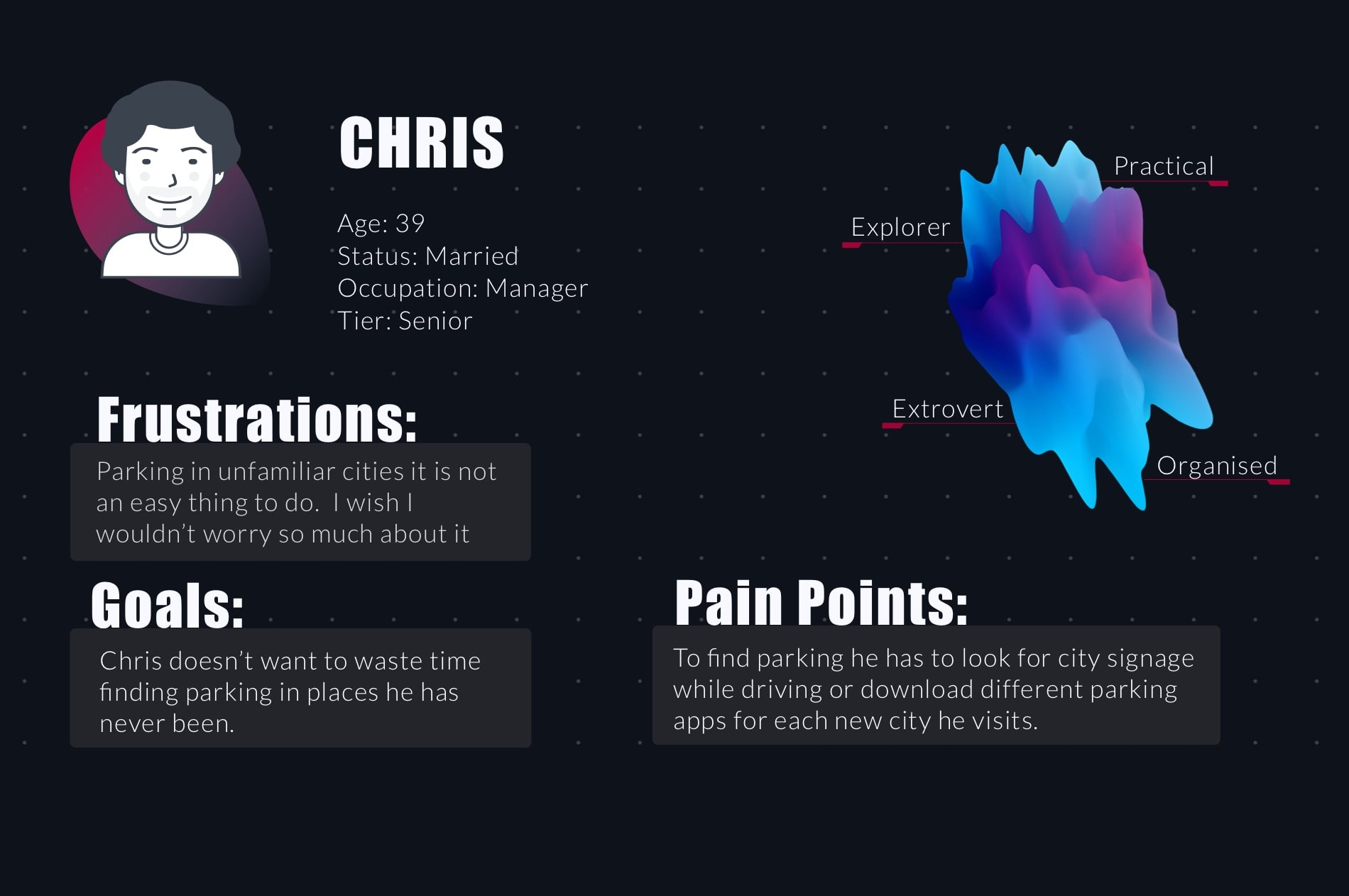 The app user flow is based upon three core features which will require a Mazda authentication for safety purposes. The app should serve as portal to "everything Mazda" for the Mazda car owner. 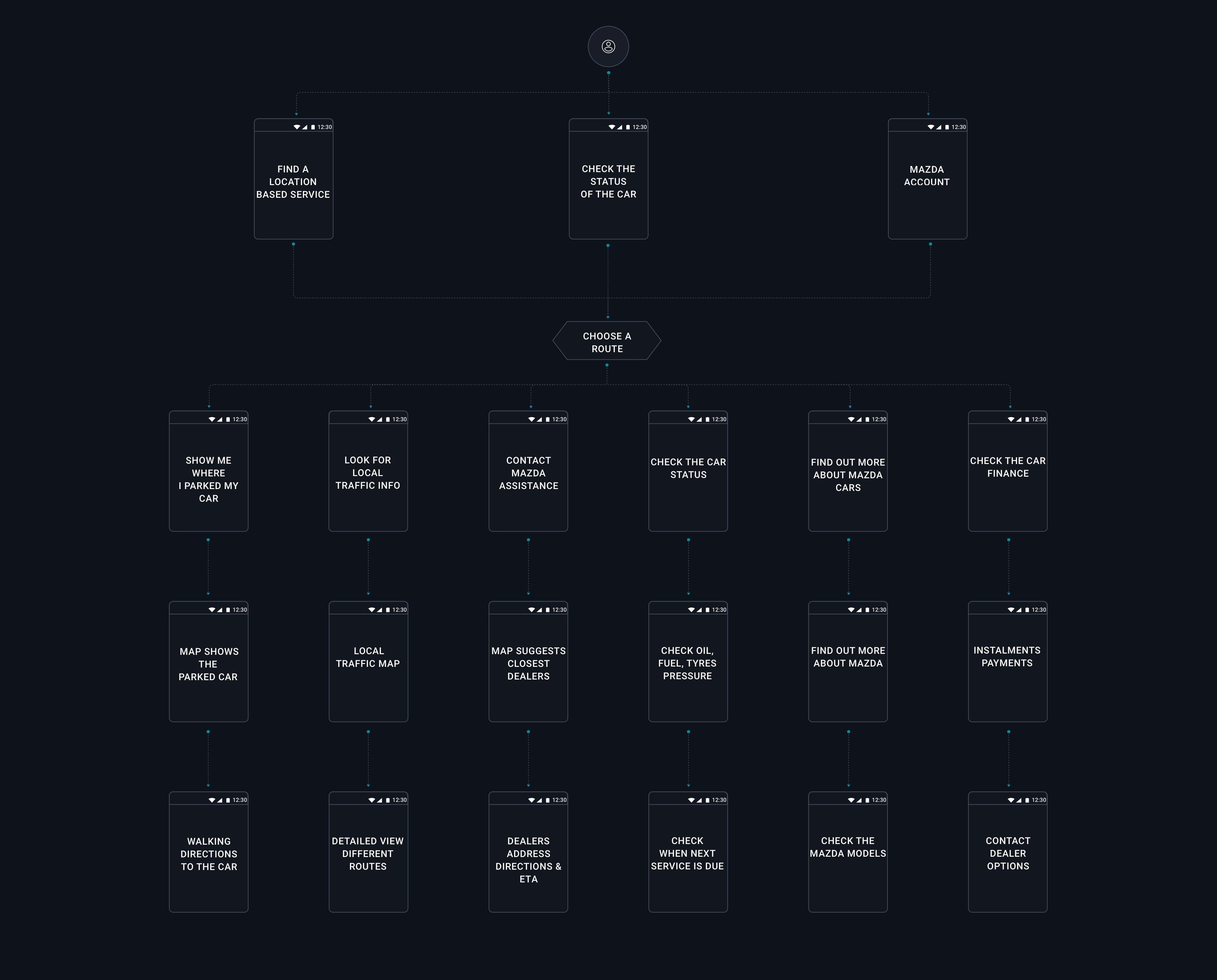 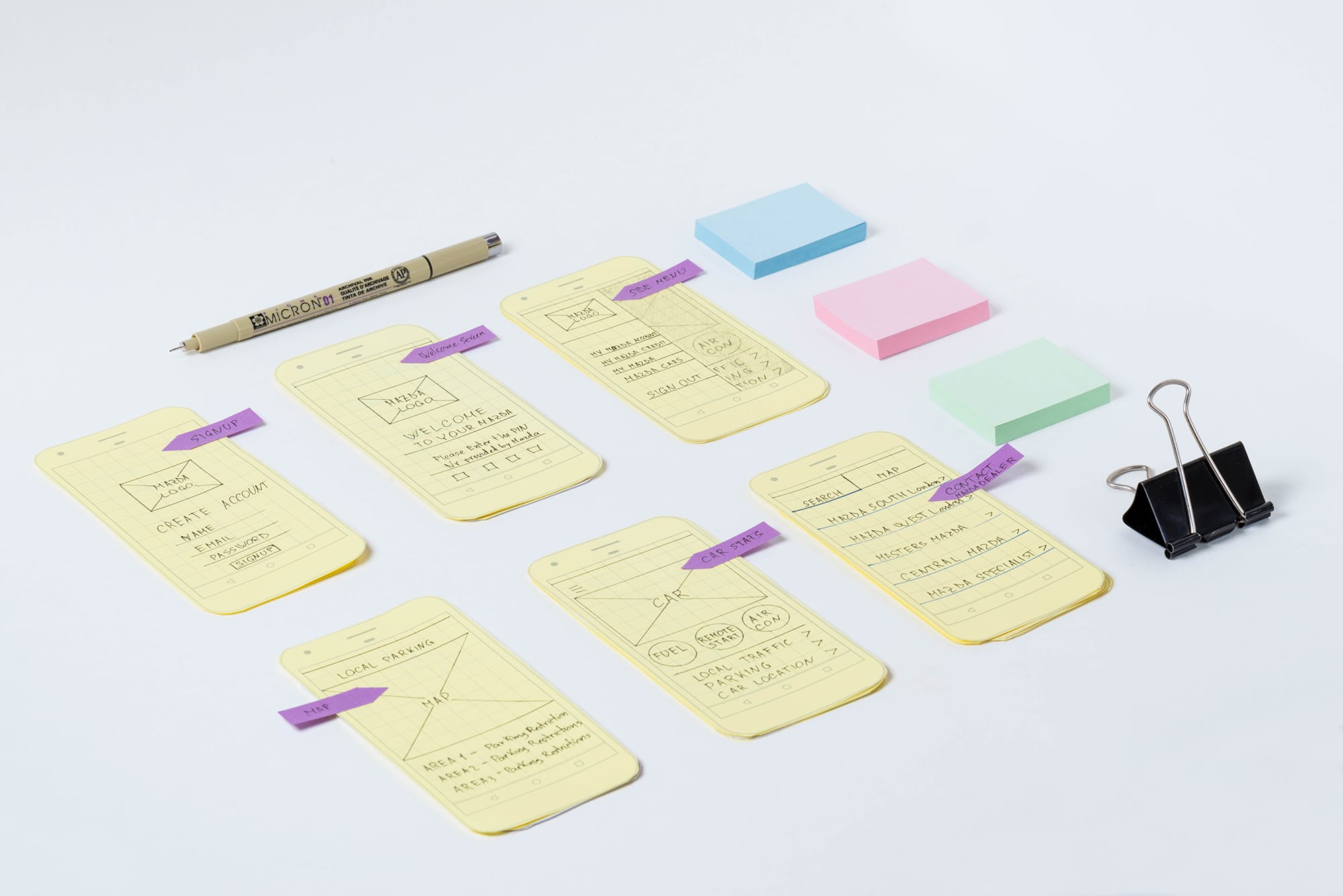 Based on users feedback the new app had to offer a level of user interactivity matched by the most requested  features.

/Never be left out on the road

With Mazda Assist, the new drivers can feel safer and always connected with their Mazda dealership.

With community edited maps users can leave tips on local parking and alert others about traffic on the road. Mazda owners can also locate where they have parked their car.